Cholic acid is a major component of primary bile acids that are biosynthesized in the human liver, using cholesterol as a starting material through several enzymatic reaction steps in hepatocytes. Cholic acid promotes fat absorption from the digestive tract, regulates cholesterol homeostasis, and promotes bile secretion. These functions are essential for the removal of endogenous and exogenous toxins through enterohepatic circulation. 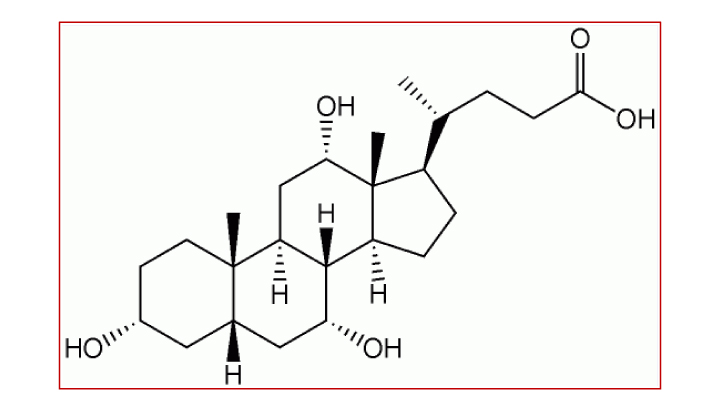 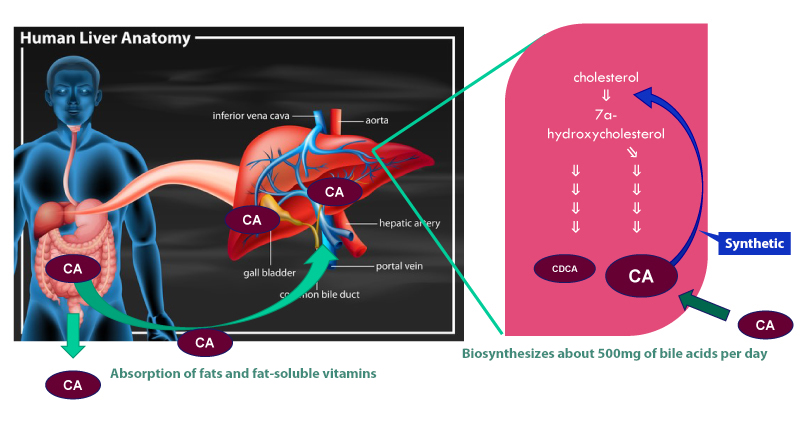 Inborn errors of bile acid metabolism (caused by a single enzyme deficiency (lack)) is a disease caused by a or the hereditary deficiency of one of the enzymes involved in the biosynthetic pathway (neutral pathway and acidic pathway) from cholesterol to bile acids in the liver.
The number of patients is extremely small (minimal), and it is said to account for about 1-2.5% (Note 1) or 5% (Note 2) of all cases of bile stasis of unknown origin. In Japan, eight patients have been identified so far. The clinical manifestations are hepatic dysfunction with jaundice, grayish-white stools, and dark yellow urine as the main complaint, accompanied by obstructive jaundice, and hepatoma, and splenomegaly when it progresses. It can cause severe bile stasis liver disease (usually in infancy), progressive neurological diseases (disorders) that develop in late childhood or adulthood, and fat-soluble vitamin deficiency. If progressive (developed) and untreated, it can lead to death due to cirrhosis or liver failure.

Pathogenesis of the disease
In patients with this disease, the biosynthetic steps from cholesterol to bile acids are impaired, so the reaction does not proceed to the production of bile acids, the final metabolites, and the accumulation of highly toxic intermediate metabolites that causes liver damage occurs instead.

Besides, when bile acids are not produced, the amount of cholic acid (the main component of bile acids) becomes insufficient, and the inhibition of the synthesis of 7a-hydroxycholesterol, which is negatively regulated by cholic acid, in turn becomes ineffective. As a result, the metabolism of cholesterol to bile acids does not stop, and a vicious cycle occurs in which abnormal intermediate metabolites continue to be synthesized.

As this vicious cycle continues, various metabolic abnormalities due to liver damage and fat malabsorption will progress and become severe.

Mechanism of Action of Cholic Acid

It has been reported that oral administration of cholic acid suppresses the production of abnormal bile acids by down-regulating cholesterol 7alpha-hydroxylase in the liver (Setchell and O’Connell 2007). Orally administered cholic acid reverses biochemical and histological abnormalities and improves liver function by activating bile flow and promoting hepatic clearance of toxic substances, including abnormal bile acids and bilirubin. It is also expected to improve growth inhibition by promoting the absorption of fat-soluble vitamins and fats.

Cholic acid is already sold as a pharmaceutical product in Europe and the U.S. and is regarded as a standard treatment method for IEBAM with established efficacy and safety. (Note 3)
(Note 3) In Japan, as an unapproved drug with high medical necessity, development companies are being sought, and ReqMed is proceeding with Japan’s development in collaboration with Laboratories CTRS of France.

Pentosan polysulfate is a plant-derived semi-synthetic substance that alleviates the symptoms of knee osteoarthritis through its complex action on joint tissues. It is also expected to ameliorate the lower limb dysfunction of HAM by inhibiting the infiltration of HTLV-1 infected T cells into the spinal cord.
Indications: Osteoarthritis of the knee (Phase II clinical trials) ・ HTLV-1 related myelopathy (clinical research)

Adult T-cell leukemia virus (HTLV-1)-associated myelopathy (HAM) is chronic, progressive myelitis caused by infection with the human retrovirus HTLV-1. It is associated with gait and urinary problems, and so forth. A nationwide survey of HTLV-1 carriers and related(associated) diseases was conducted in 2008. In 2008, a national survey of HTLV-1 carriers and related diseases was conducted, and the number of carriers nationwide was reported to be approximately 1.08 million based on a survey of antibody-positive first-time blood donors. Another report estimated that the incidence of HAM is 3 out of 100,000 carriers per year, and the number of patients is approximately 3,600. Steroids and interferon-alpha are used for treatment, but steroids have side effects due to long-term administration, and interferon-alpha also has side effects, so there is a need for a new treatment method.
With the funding received from the JST’s A-STEP program, we conducted a clinical validation study of pentosan polysulfate in collaboration with Nagasaki University toward the development of a new HAM therapeutic agent. Based on these results, we are now planning to conduct clinical trials to approve the drug.

Osteoarthritis is a disease that tends to occur in the knee and hip joints, causing pain, tenderness, limited range of motion, and edema as a result of localized inflammation and deformation of the joints caused by wear and tear of the cartilage that cushions the joints and weakening of the muscles. According to an epidemiological survey conducted by the 22nd Century Center of the University of Tokyo, about 75% of women and 53% of men over the age of 50 were diagnosed with knee osteoarthritis, which corresponds to about 30 million people in terms of population. Once the disease develops, it is impossible to regain healthy joints, but with proper treatment, it is possible to slow down the progression of symptoms and lead a normal (an everyday)daily life.
Pentosan polysulfate is a pharmaceutical product manufactured by bene PharmaChem GmbH & Co. KG in Germany. It is approved and marketed in Europe as an anticoagulant (a drug that prevents blood from clotting) and as a treatment for intermittent claudication and in the U.S. as a treatment for interstitial cystitis, a type of chronic cystitis. On the other hand, in Japan, several clinical studies, including one conducted by the Pentosan Research Group led by Professor Emeritus Masami Niwa of Nagasaki University School of Medicine, have further shown that the drug is effective for chronic knee arthritis. (Note 1)
We have started co-development of this drug with bene pharmaChem GmbH & Co. KG and conducted Phase I and Phase II studies in Japan to obtain an indication for (indicate)osteoarthritis of the knee.

Eltoprazine is a partial agonist (*1) of 5HT1A/1B (*2), and its efficacy has been confirmed in animal models of central nervous system diseases, and it is being developed for the following indications.

Note 1: 5HT1A/1B is a subtype of a receptor to which serotonin, an important endogenous neurotransmitters, binds.
Note 2: A partial agonist is a substance with antagonistic effects that does not completely block the receptor, but rather acts to leave a small amount of biological response.

Parkinson’s disease is a progressive neurodegenerative disease caused by degeneration and loss of dopaminergic neurons in the substantia nigra of the midbrain. It is a disease in which the amount of dopamine released decreases, symptoms such as tremor, rigidity, immobility, and abnormal postural reflexes (postural disorder) appear, and movement disorders gradually progress. The prevalence in Japan is 0.1% to 0.15%. Dyskinesia is the name given to a group of strange movements that cannot be stopped by the patient himself/herself, or that appear immediately after stopping and are caused by long-term levodopa (L-DOPA) therapy in the treatment of Parkinson’s disease, and are involuntary movements that occur and disappear with time. Motor fluctuations occur in more than half of patients after 5-10 years of treatment with levodopa, and the percentage of patients with dyskinesia increases as the number of years increases.

Serotonin has already been reported to be involved in dyskinesia associated with L-DOPA treatment in Parkinson’s disease (Note 3, Note 4). This drug was also found to suppress L-DOPA-induced dyskinesia in animal studies. Currently, we have obtained a grant from The Michael J. Fox Foundation, a Parkinson’s disease patient organization founded by Michael J. Fox. We have started a human efficacy study (POC study) in the fourth quarter of 2010.

Attention-Deficit Hyperactivity Disorder (AD/HD) is a type of developmental disorder in which symptoms are usually identified by the age of 7. It is a persistent disorder that causes difficulty concentrating, overactivity, and inattention.
PsychoGenics, Inc. discovered the drug as a potential treatment for AD/HD using PsychoGenics’ animal model of AD/HD, and ReqMed has been working with PsychoGenics, Inc. to develop the drug. Phase II clinical trials conducted by PsychoGenics, Inc. in the U.S. have been completed, and the efficacy and tolerability of the drug in AD/HD patients have been confirmed. In Japan, several AD/HD drugs are under development, and ReqMed believes that expanding the range of AD/HD drug options will bring good news to AD/HD patients.

The U.S. National Institutes of Health (NIH) has also recognized the need for a therapeutic agent for cognitive impairment in schizophrenia. With the NIH funding, we have validated a clinical assessment method for this cognitive impairment (Note 5). We are currently evaluating a therapeutic agent using the validated assessment method (Note 6) as the next step. Since this drug was found to improve cognitive ability in animal studies, we applied for and were selected for this project.